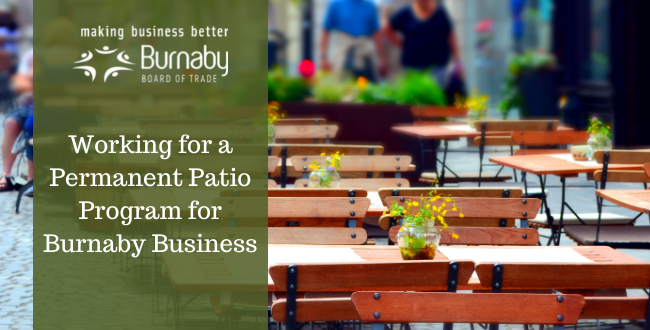 October 5, 2021 — At last night’s Burnaby City Council meeting, a partial extension was granted to the City’s patio expansion program which saw restaurants, cafes and breweries able to set up temporary patios in parking lots, on sidewalks, and in some cases on city streets.   Slated for expiration on October 31, the program has now been expanded to June 1 for those businesses using patios on private, on-site property, and for those using public space where there is limited impact on traffic.  The program will still expire on October 31 for those patios on major roads such as those on Hastings Street.

This program — Active Sidewalks, Open Businesses — was first endorsed by the Burnaby Board of Trade’s Business Recovery Task Force in spring 2020, and has since seen dozens of businesses able to use the program to create additional seating and service options, particularly during the previous restrictions on in-person dining.   Since then, the BBOT has been advocating with City Staff and Councillors to extend the patios beyond October 31, particularly for those where there is little impact on neighbouring businesses or efficient transportation.

The BBOT will continue to work with the City on a soon-to-be-developed permanent program, which will allow patio expansions in either a permanent or seasonal manner.

This program is a great example of responsive policy making by the City of Burnaby, and the BBOT applauds Mayor, Council and City Staff for implementing the program quickly, and expanding it twice now to support our restaurant and hospitality sector.