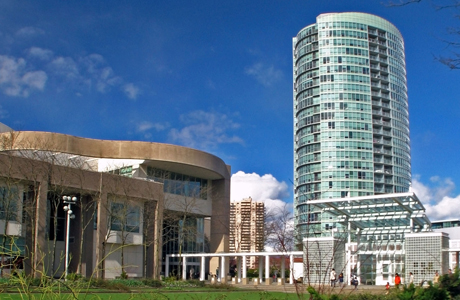 A Dynamic and Diverse Population

Burnaby is the 3rd largest city in British Columbia, with a population of over 232,755 .  While Burnaby represents only 3.1% of the land area of the Metro Vancouver region, it has 9.4% of the region’s population and is continuing to grow, experiencing a 4.3% population increase over the period of 2011-2016.

Burnaby is expected to add over 120,000 new residents over the next 25 years as it is increasingly recognized as an ideal place to live, work and play.

Burnaby is home to two world-class post-secondary institutions—Simon Fraser University and BCIT—and as a result, Burnaby’s population is well educated with 70.5% of working age Burnaby adults possess a post-secondary education. 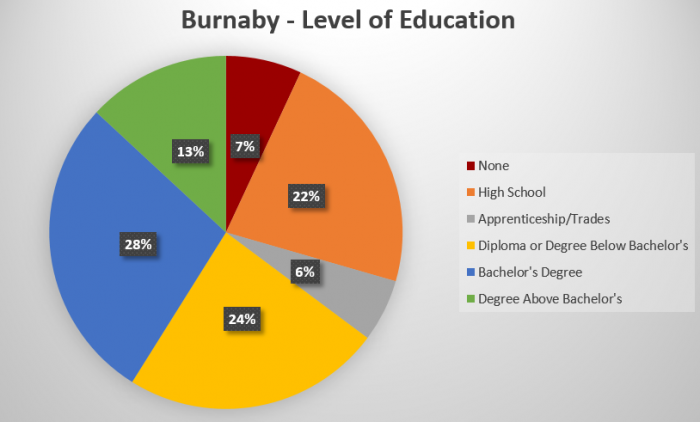 Burnaby’s population is also incredibly diverse, with approximately 64% identifying as a visible minority and 56% having a mother tongue other than English.

Burnaby has particularly strong ties to Asia with 60% of its population being of Asian ethnic origin and 35% being of Chinese descent. Other significant ethnic origin populations include Indian (7.4%), Filipino (6.2%), and Korean (3.5%).  These strong historical and cultural ties to the Asia Pacific provide a wealth of opportunity for Burnaby-based businesses by facilitating connections with those international markets.

The city of Burnaby has fostered international connections through its Sister City initiatives with China, Japan and Korea and the United States (http://www.burnaby.ca/About-Burnaby/Sister—Friendship-Cities.html) and the Burnaby Board of Trade has developed a deep roster of contacts in the Asia-Pacific business community through receiving travelling delegations and participating directly in cultural and economic exchanges. (http://bbot.ca/business-services/international-business-resources/ ) 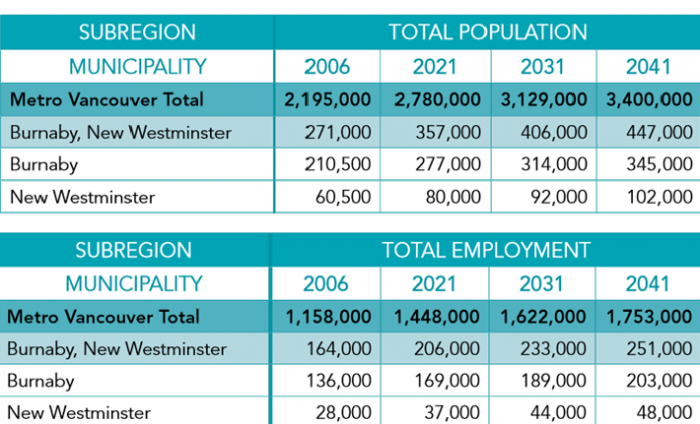 BC Stats
Find demographic information about Burnaby and the rest of BC.

BC Employment & Labour Market Services
Information for employers, workers and job seekers – a resource for employment programs and services available in British Columbia.

Work BC
Economic statistics on B.C.’s economy and how they will affect opportunities in the labour market. Find out how B.C.’s population is expected to change over the next 10 years and see which careers will be in demand in our region.

Burnaby’s Economy – Historic Data (1971-2001, 1991-2001 and 1991-2006)
Historic data on Burnaby’s economy – population, labour force, employment, changes in employment type, changes in occupations, place of residence of Burnaby employees, industries within Burnaby that have a regional competitive advantage, distribution of occupations and industries, development cost charges and tax rates can all be found starting on page 2 of the following document.
Burnaby EDS 2020 – Chapter on “Advancing from a Position of Strength”

Burnaby Social and Demographic Trends (1981-2006)
The information in this report provides an overview of important social and demographic trends and establishes a baseline for monitoring changes in the future. Information is provided on population size, age structure, families and households, cultural diversity, labour force, education and income in Burnaby and in neighbouring cities.

Statistical information is available for the city as a whole or as profiles for each of Burnaby’s neighbourhoods.
http://www.burnaby.ca/About-Burnaby/About/Population—Quick-Stats.html

Copyright © 2020 Burnaby Board of Trade. All rights reserved