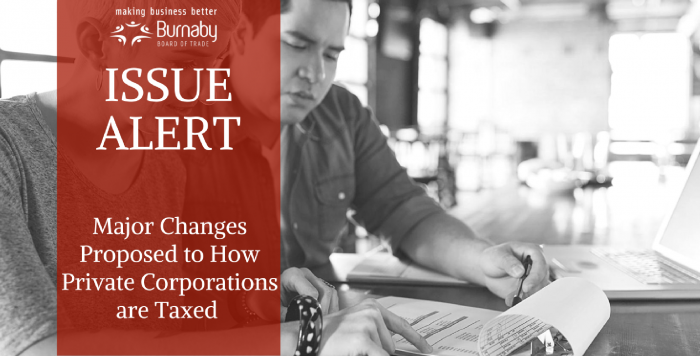 111The federal government has proposed significant changes to the taxation policies and regulations surrounding private corporations which may have substantial negative impacts on small businesses and incorporated individuals.

While the justification for these regulations is a focus on tax fairness and closing loopholes for high-income individuals, the sweeping changes that are proposed could have widespread consequences for the business community as a whole and would impose complex layers of tax regulations on all corporations, the vast majority of which are tax-paying, law-abiding and job-creating businesses.

These changes will have taxation implications for private corporations as changes are proposed to various tax planning strategies.  Amongst the proposed changes, three concerning areas of focus are:

Click the above links to read basic details of each of the proposed changes explained in plain language.  The Burnaby Board of Trade is happy to provide our members with this kind of context and information delivered in a clear, concise manner.

These sweeping changes are complex and feedback is only being accepted until October 2nd. The Burnaby Board of Trade will be speaking out on your behalf to the federal government on this issue highlighting the overreach of these changes and calling for them to be paused until a more robust engagement and consideration process is undertaken.

The BBOT will be advocating itself, but encourages its members to consider contacting their federal Member of Parliament and voice their thoughts directly on these proposed changes and join us in calling for these changes to be stopped.

For those wishing to submit comments to the federal government during this consultation, information on making a submission can be found here.

More reading on this topic:

Further details on the proposed changes

Reviewing and taxing the income paid to family members

Called “income sprinkling” by the government, this involves sharing a corporation’s income with family members through dividends and other income to limit the amount of tax owed. The family members (such as a spouse or adult children) are often subject to lower personal tax rates and therefore less tax is paid than if the principle individual of the corporation were to realize all of the income themselves.

The government is proposing to expand the existing “kiddie tax”—the tax on split income for minors—to all adult family members as well.

Dividends and other income received by adult family members of the principle of the business will be subject to a “reasonableness” test based on the work they provide to the business or the amount of money they have invested in the business.  The government will evaluate if the amount of income a family member receives is reasonable and if it deems an amount paid is too high then the excess will be taxed at the highest tax rate.

The administrative burden of such conducting such a test, the potential tax increases, and the likelihood of lawsuits and audits as a result, could be significant for the business community.

There are also proposed changes to limit the use of the lifetime capital gains exemption by family members who are minors.  Currently, family members may use their own Lifetime Capital Gains Exemption ($835,716) to shelter capital gains from the sale of the corporation’s shares from taxation.

Holding an investment portfolio within a corporation can result in greater investment returns as corporate income tax rates are much lower than personal income tax rates and therefore a larger amount of funds would be available to invest and accumulate returns over time. The federal government is considering several complex rules which would neutralize any tax advantages to holding investments inside a business.

While the federal government suggests this will only impact a limited number of high-income earners, the reality is that many private corporations and small businesses retain funds in the business which may be used at a later date for business investment or as ‘bridge financing’ to overcome downturns in the business. The modest growth advantages to keeping funds inside a corporation would seem reasonable in light of the overall risk and responsibilities accepted by the shareholders of the corporation/business owners.

Taking the money out of the corporation to invest personally would see tax payable on the income/dividend at the beginning, reducing the amount of money available to invest. Leaving the income inside the corporation and investing it would allow the full $50,000 to be invested and therefore realize stronger growth over time.

While they would still pay tax on the funds when they are eventually withdrawn, they are able to realize some tax benefits compared to the individual who takes it as income and invests it in a personal account.