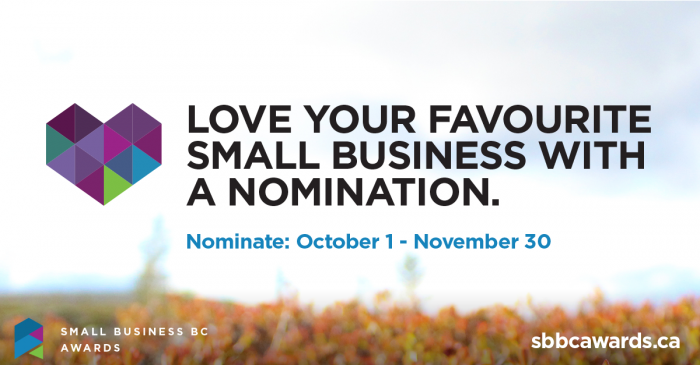 Nominations and voting are now open for the 13th Annual Small Business BC Awards.

Recipients of Small Business BC Awards will be recognized with the Premier’s Prize in the amount of $1,500 cash. The winners will also be offered a one-year all-access pass to Small Business BC education resources and experts, and one-on-one business mentorship opportunities with notable advisors from award sponsors.

The contest is open for nominations and voting until November 30, 2015. The public is invited to nominate their favourite small businesses for a Small Business BC Award.

Nominated business owners will be tasked with gaining as many votes as possible through social media, word of mouth, e-mail or any other means possible by November 30, 2015.

The businesses with the highest number of votes in each award category will be announced as the Top 10 on December 11, 2015. These nominees will submit a detailed application that judges will use to determine the Top 5 finalists from each award category, announced on January 29, 2016. The Top 5 finalists will then be invited to present a 10-minute Dragons’ Den-style pitch to the judges to prove themselves as one of BC’s best.

The winners of each category will be announced at the Small Business BC Awards Ceremony on February 25, 2016 at the Pan Pacific Vancouver Hotel.

More details on the Small Business BC Awards can be found at www.sbbcawards.ca.