Shedding Layers is an exhibition that will be held at the Deer Lake Art Gallery featuring the work of Visual Artists David Righton, Jenn Ashton and Ceramicist Nicole Smith. Shedding Layers is hosted and organized by the Burnaby Arts Council.  The Exhibition will open on February 18th and will run until March 11th, 2017.

The three artists participating in Shedding Layers have rendered imagery that is inspired by  dreams, stories, and their hopes and fears for the future. It is a colourful exhibit that will help the viewer in shedding  the layers of winter and embracing the vibrancy of spring.

Righton is a self-taught artist who’s artistic process entails the use of all manner of objects such as scrap wood alongside conventional pallet knife and brushes producing, in layers, work that is highly evocative and dreamlike in the tradition of remembrance art. Righton strives to capture images from dreams shifting everyday concepts from the known to the unknown. Righton lives and works in Port Moody.

Ashton is an author and artist who creates endless layers with collage and acrylic paint as her medium. Her works appear as dreamlike images in which her poetry and subconscious imagery fuse. Her work contains a visual seductiveness that she hopes will entice, through her vibrant images, what Ashton refers to as a deep belly laugh. Ashton is an award-winning artist who has exhibited both nationally and internationally.

Smith has sought out the crow as the muse for her current conceptual ceramic art. Her 3 dimensional whimsical sculptures capture all that the society sees in this dark bird. Her interests in the crow are the multi-layered associations that almost all cultures have with the crow. Harbinger of doom, scavenger, nuisance; they all capture man’s fears and anxiety that are faced in the wake of environmental devastation, financial crisis and social breakdown. Hope materializes as we realize the crow’s adaptability, resourcefulness and survivalist abilities and our very similar characteristics. Smith is a graduate of Emily Carr University of Art and Design and Comosun College. She currently works out of Hello World Ceramics Art Studio in Vancouver. 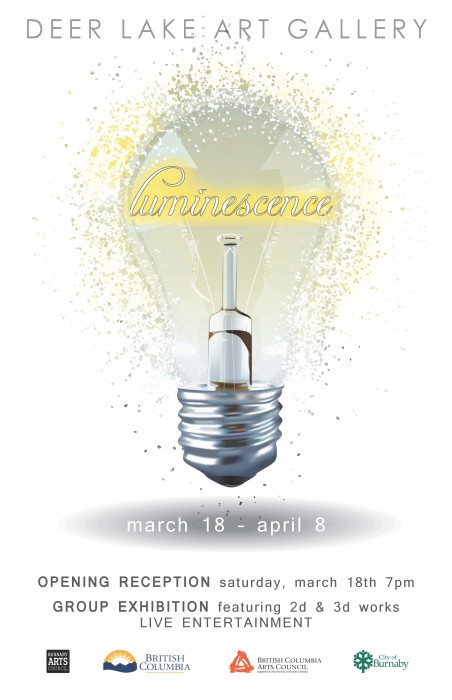 Featured Artists:  Group Exhibition, to be confirmed at a later date

Luminescence II is an exhibition that will be held at The Deer Lake Gallery featuring the multi-disciplinary work of a large and diverse group of artists. Luminescence is hosted and organized by The Burnaby Arts Council. The Exhibition will open on March 18th and will run until April 8th, 2016. Luminescence II celebrates, through human creativity and spirituality.

The second Annual Luminescence Exhibition marks the March equinox occurring at 10:29 UTC on March 20th. On this day the Sun will shine directly on the equator and there will be nearly equal amounts of day and night throughout the world. This is also the first day of spring (vernal equinox) in the Northern Hemisphere and the first day of fall (autumnal equinox) in the Southern Hemisphere. From the latin: “Lumen” meaning light and the old English addition “escence” or spirit of the word Luminescence emerged.

Across the world, in different cultures it is an important date. Jewish Passover falls on the first full moon after the vernal equinox. Sham el-Nessim was an ancient Egyptian holiday that traces back to 2700BC and during Egypt’s Christian period it became Easter Monday. The mythological King of Persia ascended to the throne on this day and is commemorated by a two-week festival. It is a Zoroastrian holidays as well as a holy day of the Bahá’í Faith and Nizari Ismaili Muslims. The day after the equinox, it is the Bengali New Year’s Day. Japan has made it an official national holiday. The coming of spring and all that relates to it is celebrated widely.  All these celebrations make a point to celebrate the creation of light to some degree.

Each participating artist in Luminescence II will exhibit 1-2 pieces that will explore and celebrate the use of light in its many forms. Some of the work is 3 dimensional and architectural in order to produce aspects of light not normally visible. Materials used by the artists include concrete, wood, metal, industrial paint, mirrors, glass, plaster visualize what light represents to them. Photography is also represented.

In this exhibition over 15 notable artists, from varying disciplines, present the many ways this brilliant natural phenomenon, which is the essence of light or Luminescence has inspired them.

Featured Artists:  Group Exhibition, to be confirmed at a later date

In connection with the Canadian Clay Symposium R:evolution, the Burnaby Arts Council has invited local contemporary ceramic artists to showcase their garden sculptures in our beautiful outdoor exhibition space.

Allegory is an exhibition that will be held at the Deer Lake Art Gallery featuring the work of Photographers Julie Prescott and Kenneth Gillespie. Allegory is hosted and organized by the Burnaby Arts Council.  The Exhibition will open on April 5th and will run until May 6th, 2017.

The two artists participating in Allegory have a commonality in that both establish a link between the landscape’s reality and that imagined by its conceiver; the hidden meaning, or allegory. Both challenge the subject from completely different perspectives.

Prescott is an award-winning photographer with a particular reverence to water. Water represents to her deep, reflective and shape shifting matter. Photography allows the viewer to connect with life’s minutiae in the texture, tone, shadow and light of water. Nothing re-arranged, framed or photo shopped, but caught in the act of being all that is water.

Gillespie has a lifetime of experience behind the lens of a camera. He has become increasingly fascinated by the options of digital photography. His works are an investigation into representations of (seemingly) concrete images. By exploring the concept of landscape Gillespie, with the help of physics and technology, enables the viewer to see his interpretation of the world. The hidden meaning of his work is the landscape as most view it and how it is imagined by Gillespie.

Please join us the Deer Lake Gallery for the opening of Allegory on Thursday April 13th, 7 pm.