BC Budget 2022 & Burnaby Board of Trade Analysis 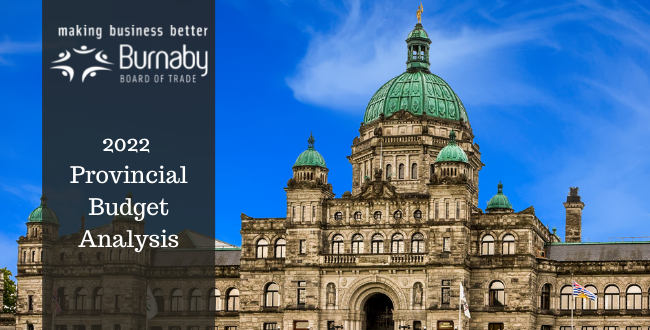 February 22, 2022 – Today, BC’s Minister of Finance Selina Robinson released the 2022/2023 provincial budget, outlining the provincial government’s spending priorities over the coming years and providing a reporting of the state of the government’s finances.

Below, read the Burnaby Board of Trade’s highlights of some of key announcements in the budget, plus access further resources and analysis on what this budget means for you.   This budget largely builds on previous announcements made around housing, childcare, and skills training with additional funding to execute on existing objectives.

The Burnaby Board of Trade will continue to work with our provincial representatives and various ministries to help shape how the government’s programs are implemented, to determine how best our members can access or participate in the various initiatives, and to advocate for further action where needed to support economic growth.

The $62.5 billion provincial budget expects a $5.46 billion deficit for the coming 2022/23 fiscal year, and is then forecasting a decreased deficit of $4.18 billion in 2023/24.  The current year’s deficit is estimated now to be $483 million, a marked decrease from the more than $9 billion forecast in last year’s budget.

While the budget does address issues important to business, such as housing, infrastructure, and childcare, it is noteworthy that there were no tax measures taken to mitigate the increasing costs of doing business in BC.  Government policies, such as the new 5-days of paid sick leave requirement, or the ongoing Employer Health Tax (which itself brought in $207 million more than anticipated in 2021/22) are adding to the costs facing businesses, not to mention the market forces driving up the costs of materials, labour, and shipping.

Budget 2022’s most significant announcement involves childcare.  The budget recommits to delivering 40,000 new spaces for children under the age of six within seven years, and seeks to reduce fees full-day infant and toddler care to an average of $20 a day by the end of the year.  Preschool and before-and-after school care will see reductions in fees to $20 a day for the 2023-24 school year.

The Burnaby Board of Trade has long advocated that childcare is an economic issue and can hold parents back from full participation in the labour force.

The budget does contain $27.8 billion over 3 years on infrastructure — a record amount — including on key pieces like a redevelopment of Burnaby General Hospital, widening Highway 1 out of the region, enhancing the SkyTrain rapid transit network.

The government is working on a workforce readiness plan which will contain its main efforts to address workforce development over the coming years.  In the meantime, Budget 2022 offers $50 million to support efforts announced as part of its economic plan, StrongerBC, including initiatives for manufacturing and life sciences, and has allocated $25 million for 2,000 new training seats in health care.

Budget 2022 plans to spend over $1 billion in new funding for climate related efforts including
– Removing PST on Zero-Emission Vehicles (ZEV), exempting more ZEVs from the luxury tax, and continuing incentives for ZEV charging infrastructure implementation
– A new 5% refundable credit for retrofits that improve the energy efficiency of multi-unit residential buildings and some commercial buildings
– $310 million over three years to help industry decarbonize operations

After the disruptions caused by the flooding in November, the Burnaby Board of Trade urged the provincial government to harden infrastructure against future climate impacts.  Budget 2022 provides $600 million to mitigate future climate impacts, including $120 million for the Community Emergency Preparedness Fund which can be used for improvements to dikes and flood protection.

For more information on Budget 2022: