Kukwits’men is an exhibition that will be held at the Deer Lake Art Gallery featuring the work of Gigaemi Kukwits & Zee Kwakwee Baker.  Kukwits’men is hosted and organized by the Burnaby Arts Council.  The Exhibition will open on January 21 and will run until February 4, 2017.

In post war Canada, aboriginal art had degenerated to a large degree. Well-known Kwaguilt artists such as Tony Hunt, Doug Cranmer and later Beau Dick, led the West Coast artistic revival after 1947. Beau Dick apprenticed under carvers Tony Hunt and Doug Cranmer. His work is on permanent display in the Canadian Museum of Civilization in Hull, Quebec. The collector’s market of indigenous Canadian art grew rapidly after this and some experts believe that certain new pieces achieve the technical skill of 19th-century masters. After the1980s, the colour palette exploded to embrace the full spectrum, and the mediums expanded to include ceramics, glass and clothing. The traditional art forms are passed down from generation to generation. Gigaemi Kukwits & Zee Kwakwee Baker represent 2 generations of artistic tradition that have made the jump to expanded technique and colour palette.

The Father, Gigaemi Kukwits’ uniqueness and innovation lies within the originality of Kukwits’ gesture and palette. Coastal design elements that are traditionally stated as bold and contained within carved works become transformed into painterly movement via Kukwits’ sweeping fluid brushstrokes. This fluidity is further emphasized by the vibrancy of his colour schemes and the syncopation of both warm and cool tones. While some of the formal elements of abstraction and modernism are evoked in Kukwits’ painting, there is also an underlying fascination with language. In the recurrence of patterns and motifs, Kukwits is interested in the syntax of visual glyphs and how meaning is communicated beyond the verbal. Much of his practice forms part of a larger exploration of a vocabulary focused on gesture and form rather than direct language.  Kukwits was born in 1945. His name was appointed in a Cedar Bark ceremony, and derives from his grandparents of the Tse wa daen uk and Mus gamma nations. He studied at the Vancouver School of Art (Emily Carr University of Art & Design) in 1967. He lives and works in Vancouver, B.C.

The son, Zee Kwakwee Baker is a contemporary North West Coast Multi-Media Artist. A member of the Squamish band, he is related to the Kwaguilt, Tlingit/Haida and Celtic people through blood, and has traditional roots from Alert Bay and Kingcome Inlet areas of British Columbia Canada. He incorporates all his world travels and experiences in his artistic traditional representation, with his expansive spiritual flow and visionary dream-like impressions. Zee Kwakwee accredits his father Frank Baker and mother Thais Sewell, and family friend Tom Doucette, for his contemporary foundation and inspiration. His upbringing in the Potlatch ceremonies and fortunate mentoring by Tony Hunt, Doug Cranmer and Beau Dick, gave him an early understanding of the complexities of “our art” forms; design, history, meaning and of his rights to family crests.  Zee Kwakwee Baker is an accomplished illustrator, animator, graphic designer and instructor. Zee Kwakwee continues to push the boundaries of new and innovative platforms of the old form lines and flow that challenges a breakthrough in what we know as contemporary northwest coast Native Art form.

Please join the Burnaby Arts Council at the Deer Lake Gallery for the OPENING CEREMONY of Kukwits’men on Saturday, January 21st at 12:00 pm.  They are looking forward to the First Nations song protocol, storytelling and drumming during the ceremony. Reception to follow.  Exhibition runs until February 11, 2015. 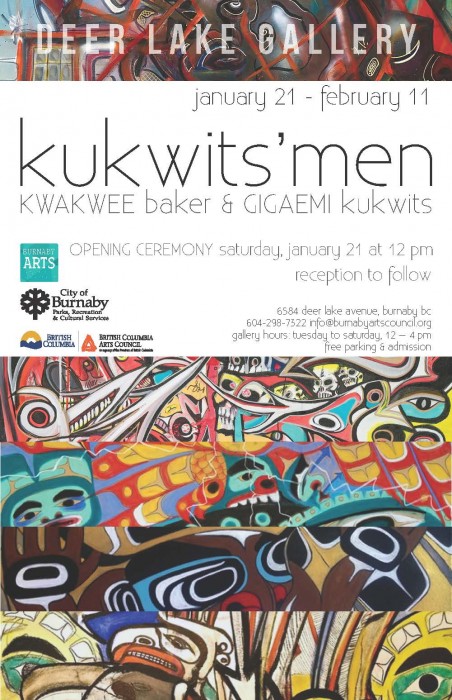