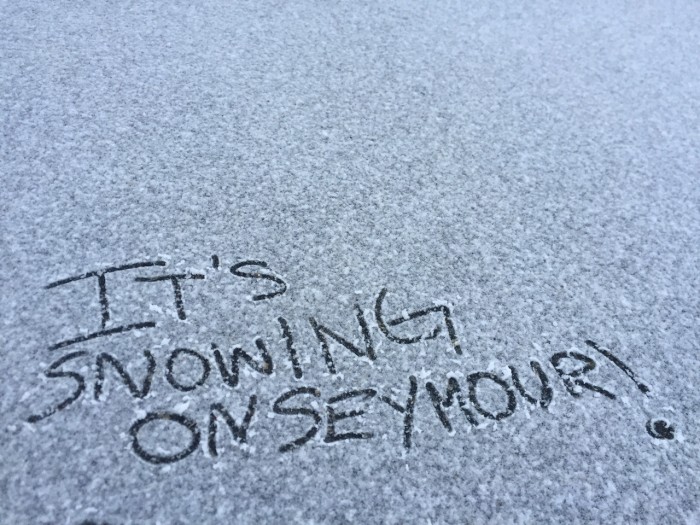 Mt Seymour is pleased to announce that the resort received 10cm of accumulated snowfall at the top of the Brockton Chairlift on the morning of November 12, 2015. This marks the fourth snowfall of the season, and is characteristic of historical winter weather conditions during an El Nino year on the North Shore.

ENSO released their latest update (November 12, 2015) for this winter. They measure the strength of an El Nino based upon a unit scale + or – the mean sea temperature to show the severity of the El Nino. So an El Nino of 1.0 would equal the sea temperature being one degree warmer than average and a La Nina would be -1.0 degree. So the forecasts for the coming year are as follows:

If we consult historical snowfall data for Dog Mountain in Mount Seymour Provincial Park and the corresponding ENSO strength, we can determine what an El Nino of that strength means for Mt Seymour. The closest season we can point to is that of 1997/98 where we experienced an El Nino that peaked at 2.5 to 2.7 which is even stronger than most models for this El Nino. In that snow year, Dog Mountain still had 226cm on the ground come April 1.

The snowfall for 1997/98 started accumulating in Northern Washington State and some other local resorts on December 1 and most resorts had a minimum of 2.5 feet (75cm) by December 15. At our elevation, this was also the case.

Overall, the average snow on the ground in a “strong El Nino” year is approximately 236cm come April 1 versus 265cm in a neutral year. This means that the average difference between the snowpack in strong El Nino years and non-El Nino years is only 29cm. This may or may not translate to this year but hopefully this will give us all confidence going into the season.