The Burnaby Board of Trade (BBOT) remains deeply concerned with this new tax and continues to oppose it. The BBOT has proposed amendments to help make the tax less damaging to small businesses, including increasing and indexing the exemption thresholds, (read the BBOT’s 4-point plan to oppose and fix the Employer Health Tax here) and the BBOT is calling on the provincial government to repeal or fix the Employer Health Tax and is asking our members to join us in this call by contacting their own MLAs to express their concerns.  You can click here to find your MLA and their email address.  Be sure to include a ‘cc’ to Finance Minister Carole James’ office at FIN.Minister@gov.bc.ca

In BC Budget 2018 presented on February 20th, the provincial government announced the introduction of an “employer health tax” which will require organizations with payrolls of over $500,000 per year to pay a new payroll tax to fund the removal of Medical Services Plan (MSP) premiums. The BBOT does not support imposing the new employer health tax on businesses and not-for-profits and has several concerns with it.

Burnaby Board of Trade’s Remaining Concerns 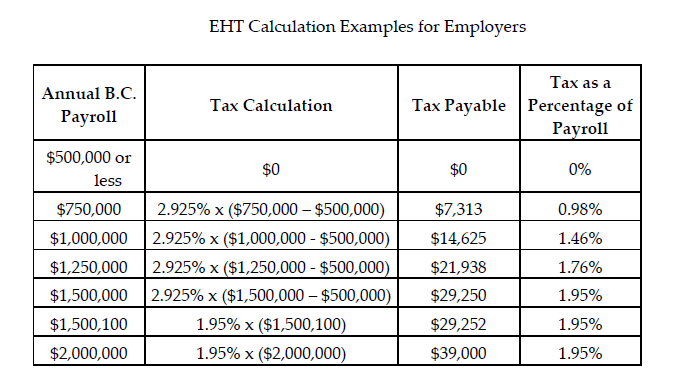 Payroll is defined as wages plus taxable benefits. This means the payroll calculations will include things like commissions, employer-paid retirement contributions, employer-paid gratuities, and maternity/paternity top-ups. A more full list is included on the above BC government website.