The Burnaby Board of Trade welcomed a new Chair and three new members to its Board of Directors at its 105th Annual General Meeting held on June 17th.

Assuming the role of Chair of the Board of Directors will be Catherine Boivie.  Catherine is currently an Executive in Residence at the Beedie School of Business and the president of Strategic Technology Leadership Corporation.  Previously she served in senior executive roles at both Pacific Blue Cross and BCAA.

Catherine is the founding chair of the Chief Information Officers Association of Canada (CIOCAN) and has served on several Boards including those of ICBC, CGA Association of Canada, and YWCA Vancouver. Catherine is the recipient of numerous awards and distinctions including the Queen Elizabeth II Diamond Jubilee Medal and was named one of Canada’s top 100 most powerful women by the Women’s Executive Network.

Catherine will be replacing Leza Muir (Pacific Blue Cross) who will be now become Past Chair after an unprecedented 3-year term as Chair from 2012-2015.

Departing the Board of Directors are Brad Alden (Burnaby Now), Scott Hardy (Scott Hardy & Associates and previously IBM Canada) and Jonathan Luk (HSBC).  These three Directors have together served over 25 years on the Board and the Burnaby Board of Trade sincerely thanks them for their contributions, insight and guidance during that time. 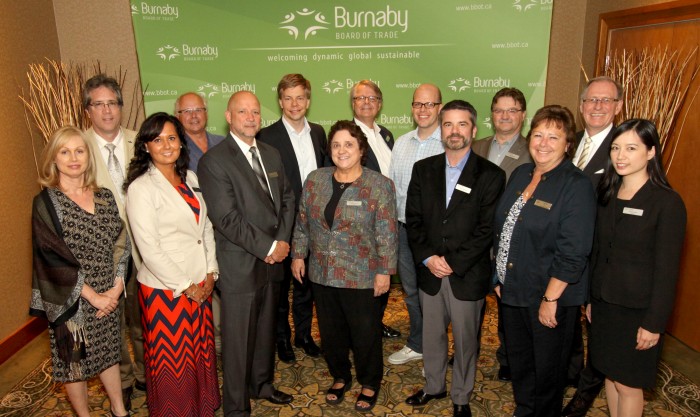