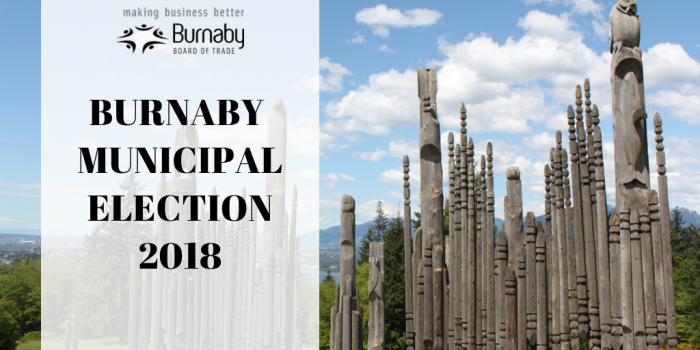 On October 20th, voters in Burnaby elected its municipal government for the next four year term, including the offices of Mayor, City Councillor, and Board of Education Trustee.

On behalf of our members, and in our economic development function, the Burnaby Board of Trade congratulates Mayor-Elect Mike Hurley and Councillors-Elect Pietro Calendino, Sav Dhaliwal, Dan Johnston, Colleen Jordan, Joe Keithley, Paul McDonell, Nick Volkow, and James Wang. The BBOT looks forward to working with the new Mayor and Council to continue to make Burnaby a great place to do business.

The BBOT also sees the education system as an integral part of successful economic development, and regularly collaborates with the Burnaby Board of Education and School District. As education is responsible for developing the employees, customers, and leaders which our business community will rely on in the future, the BBOT also welcomes the opportunity to work with School Trustees-Elect Bill Brassington, Peter Cech, Christine Cunningham, Larry Hayes, Jen Yang Mezei, Ryan Stewart, and Gary Wong.

Local government is critically important to the business community as it has a particular impact on how businesses set up and operate in a city. From city planning and zoning (determining where business can locate and which type can open), to transportation (impacting the movement of goods, services, customers, and employees), to permitting (dictating how quickly a business can set-up, change, or grow), local governments have a direct influence on the attractiveness and competitiveness of our city.

The unofficial election results can be viewed at the City of Burnaby website here.

For more on the importance of local government, click here to read Paul Holden’s recent column in the Burnaby Now.