BURNABY, BC– The Burnaby Art Gallery (BAG) will open two new exhibitions on January 19 featuring work by Burnaby-raised artist Molly Lamb Bobak (1920-2014), a national treasure, and Julie McIntyre, a Vancouver print and fibre artist. Molly Lamb Bobak: Talk of the Town is an exhibition exploring city panoramas and architectural views, primarily from the 1940s to the 1960s and Julie McIntyre: Travel Stories includes a variety of domestic objects that capture the experiences of her grandmother’s world travels in the 1960s and 1970s.

The public is invited to the opening reception for both exhibitions on Thursday, January 18 from 7-9pm. 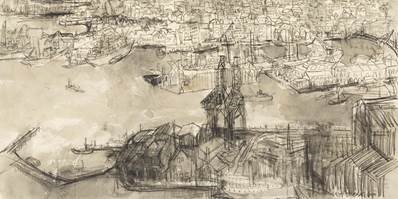 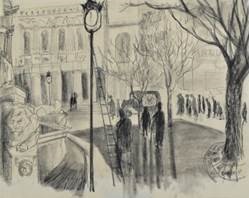 Molly Lamb Bobak (1920-2014) was famous for her wildflower watercolours and crowd scenes, painted in oil. This exhibition explores her early architectural views and city panoramas, primarily from the 1940s to the 1960s. Bobak’s work as a set designer, as well as her position as the first female Canadian official war artist during World War II, were vital influences on her cityscapes. While her depictions of crowds often portray faceless groups of people, her buildings are carefully worked and significantly individualized. For Bobak, buildings and cities seem to represent a stable counterpoint to human chaos and inconsistency.

The exhibition is accompanied by an in-depth catalogue offering a look at Lamb Bobak’s early life and influences growing up in a farmhouse on the shores of Burnaby Lake, and later at a second house in Vancouver. This catalogue features contributions by West Vancouver artist Gordon Smith and curator Cindy Richmond, a letter written by Molly Lamb Bobak’s daughter Anny Scoones and an essay by exhibition curator Dr. Hilary Letwin.

“Molly Lamb Bobak’s paintings are full of talk: people excitedly calling to each other in the crowd, chatting about this and that, whispering the latest gossip on a street corner. The faces of those doing the talking are often loosely drawn, devoid of detail, or completely obscured, but the language of everyday life is clear, in their gestures and bodies,” says Letwin.

While Lamb Bobak was very often described as someone who loved people and good conversation, the roots for her crowd-scenes, and the public settings for them, trace back to her childhood and early experiences as Canada’s first female War Artist.

Considering these experiences, Letwin further explains that “these street scenes in particular reflect a democracy. From the bombed out and ruined buildings that Lamb Bobak recorded at the end of World War II, she repeatedly witnessed at first hand the random hand of death. The faceless people that populate her cities represent countless untold stories, both of disappointment and also of hope, capturing her optimism of good things yet to come. Her later, great crowd scenes are developed from these earlier street scenes, demonstrating her ability to capture fleeting moments of celebration among the unpredictable trajectories of life. “

The exhibition catalogue will be available for purchase from January 18. Molly Lamb Bobak: Talk of the Town will be on display from January 19-April 8, 2018 at the Burnaby Art Gallery.  This exhibition features work from the City of Burnaby Permanent Art Collection and on loan from the Vancouver Art Gallery, the Canadian War Museum, the Art Gallery of Greater Victoria, the Morris and Helen Belkin Art Gallery and multiple private collections.

ABOUT THE ARTIST
Molly Lamb Bobak was raised in Burnaby and began her formal artistic training studying with Jack Shadbolt at the Vancouver School of Art. In 1942, she enlisted in the Canadian Women’s Army Corps, becoming the first female Canadian war artist and was deployed to Europe. She met her husband, fellow Canadian war artist, Bruno Bobak, in London, returning with him to Canada after the war. From the early 1950s, Bobak and her family lived and worked in the Vancouver area before travelling back to Europe through various grants from the Canada Council for the Arts and the French government. The Bobaks moved to Fredericton, NB, in 1962, where she lived and worked until her death.

Vancouver print and fibre artist Julie McIntyre incorporates a variety of domestic objects as the ground for a series of work that captures the complexities of one woman’s life journey. During the 1960s and 70s McIntyre’s grandmother, Lucy Mood McLeod McIntyre (1906 -2005), traveled the world on cargo ships, snapping hundreds of photos along the way. McIntyre mined a rich inheritance of exquisite slides to create a non-linear record of her grandmother’s search for adventure outside of the confines of an ‘ordinary’ life.

The exhibition includes a catalogue with an introduction by BAG Director/Curator Ellen van Eijnsbergen and an essay by the artist which further explains her inspiration to explore hand craft and the use of domestic objects such as aprons, quilts and handbags.

“The form of aprons was chosen as the most recognizable domestic icon, symbolizing not only a traditional version of motherhood, but the “apron strings” of social anxieties and expectations placed upon mothers and children. The quilts I have created reference the tidy, stacked compartments where precious things are stored, and act as a metaphor for my grandmother’s restrained and secret life. Only when she travelled, did she seem to be free,” writes McIntyre.

Julie McIntyre: Travel Stories will be on view at the Burnaby Art Gallery from January 19-April 8, 2018. The artist will be in attendance at the opening reception on Thursday, January 18 at 7pm.

ABOUT THE ARTIST
Julie McIntyre studied at The Banff Centre, AB in 1986 and received her BFA from Queen’s University, ON with a major in printmaking. Her prints and fibre work have been featured in solo exhibitions in public galleries across Canada and she has participated in over 40 juried exhibitions, half of which were international. McIntyre has served as President of CARFAC BC, and as BC Representative and Treasurer of CARFAC. She has taught workshops throughout Canada and has been an artist in residence with the Vancouver School Board and an instructor with ArtStarts in Schools for over a decade. From January until June 2018, McIntyre will be an artist in residence for Queen Alexandra Elementary exclusively. In 2014, she received the City of Vancouver Mayor’s Award for Arts Board Member of the Year. McIntyre lives and works in Vancouver.

ABOUT THE BURNABY ART GALLERY
Since 1967, the Burnaby Art Gallery (BAG) has been dedicated to collecting, preserving and presenting a contemporary and historical visual art program by local, national and internationally recognized artists. The BAG acts as a leader in the collection, preservation and exhibition of artists who choose to work on paper–the only public art museum in Canada dedicated to works of art on paper. Through our collection and exhibition practices the BAG endeavours to represent the best and most promising Canadian artists. The BAG cares for and manages over 5,000 works of art in the City of Burnaby’s Permanent Art Collection.