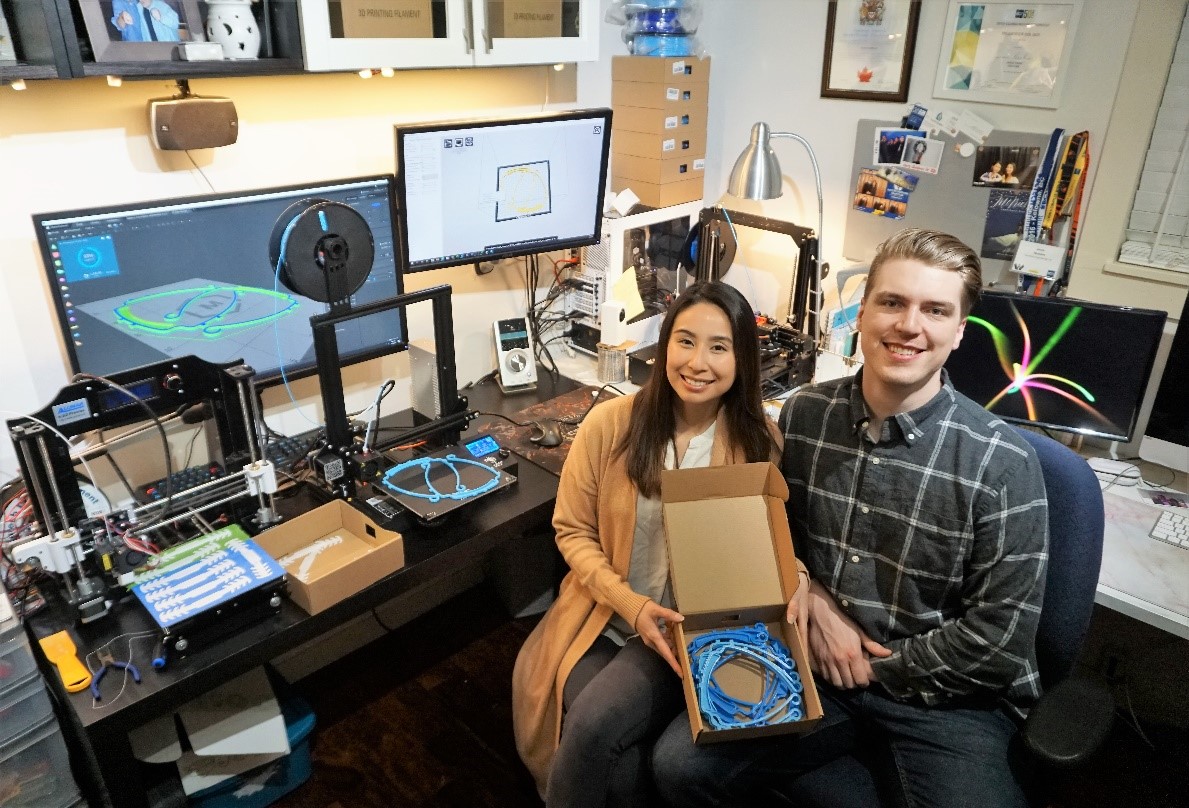 It started as a favour for a friend

Jamie and Keisha’s project started after a trip to the Philippines. One of Keisha’s friends reached out to see if they could use their 3D printers and create some PPE to send to the Philippines. With Jamie’s background in Mechanical Engineering and Keisha’s background in Design, they quickly created their first prototype. Just as Jamie and Keisha were about to ship the newly printed face shields and ear savers to the Philippines, they were informed that international shipments were being put on hold until further notice. While disheartened, they looked into other options and realized that they could instead distribute these PPE to local healthcare workers.

Within a couple of weeks, word quickly spread about Jamie and Keisha’s initiative and they found themselves working around the clock from their Coquitlam home to keep up with the demand of these supplies for frontline healthcare workers. They have also temporarily transformed their beer and winemaking room into a production space.

Jamie and Keisha’s work ethic and discipline allowed them to work efficiently and creatively in problem solving challenges that arose. The 3D printers are not perfect, self-functioning machines and require a lot of tweaking each day. In addition, they also have to deal with balancing an optimal temperature in their office as running eight 3D printers simultaneously increases the room temperature. Sourcing the supplies was a bit of a challenge as well, as not many companies were doing delivery.

“As BCIT students, we were challenged, but in a positive way. BCIT programs are not easy and the bar is set very high. Through this, we developed strong work ethics and great problem solving skills. So issues that arose with this project did not seem that hard to fix,” says Jamie.

Royal Columbian Hospital, Vancouver General Hospital, Surrey Memorial Hospital, BC Cancer Agency, Burnaby Division of Family Practice, GF Strong Rehabilitation Center, and many long term care homes are amongst some of the healthcare facilities that have benefited from Jamie and Keisha’s initiative.

“In response to the shortage of PPE, some of our healthcare workers are innovating by wearing swimming goggles and bike helmets with transparency sheets glued in front. Hearing these stories motivated us to work harder to help the community,” adds Jamie.

Jamie and Keisha currently operate eight 3D printers sourced through friends and donors. This produces about 100 face shields and 200 ear savers a day. As the supply chain catches up, it’ll only be a few more weeks for Jamie and Keisha’s hobby project to be in demand.

“One of the best cases is that we are pushed out of production because it means PPE supply is being fulfilled by large companies again,” says Jamie.

They also hope to find a way to ship the equipment to the Philippines and to other developing countries. In addition, the 3D printers that were donated will be given to local schools when their project wraps up. Learn more about Jamie and Keisha’s initiative.