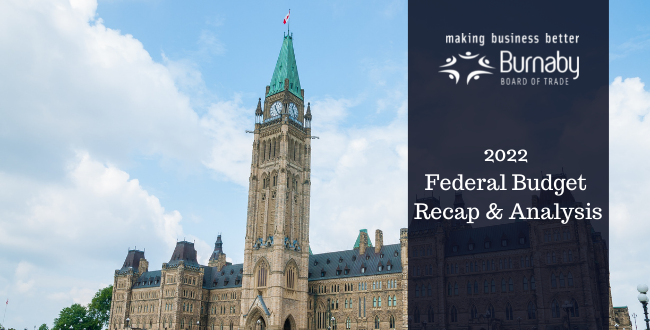 April 7, 2022 – Today, Finance Minister Chrystia Freeland released the 2022 federal budget outlining the Government of Canada’s spending plans for the coming fiscal years, and revealing the current state of the government’s finances.
Below, the Burnaby Board of Trade has provided some brief highlights of the 304-page budget document, including some of the more impactful or important policy announcements.

The Burnaby Board of Trade will continue to work with our federal representatives directly, and through the Canadian Chamber of Commerce, to help shape how any new government programs are implemented and where further action can and should be taken to support our members and our community.

This budget expects a $113 billion deficit for the fiscal year just ending, and another nearly $53 billion deficit projected for the coming fiscal year, continuing the staggering budgetary shortfalls of recent years. However, as the economy improves it is forecasting much lower deficits by the end of the 5-year projection.

The Burnaby Board of Trade is pleased the government and the Minister re-articulated the concept of a ‘fiscal anchor,’ identifying a declining debt-to-GDP ratio (how much debt government carries compared to the size of the overall economy) as its measure for containing spending.   However, in an era of increasing interest costs and economic uncertainty, we are concerned with the potential impact of future debt-servicing costs.

The budget contains several note-worthy announcements aimed at the business community, innovation and productivity, including:

For more information on the Federal Budget 2022: